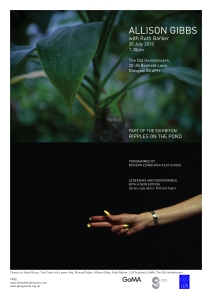 PLEASE NOTE THIS EVENT WILL BE HELD AT THE OLD HAIRDRESSERS, Renfield Lane, Glasgow !

Modern Edinburgh Film School presents a screening event on the works in 16mm film by Australian artist Allison Gibbs. This event forms a part of the exhibition Ripples on the Pond and its sister-essay A Poetic Measurement, designed as a conversation between works on paper and moving image by women artists. This event on Gibbs’s films which brings together extrasensory practices, sociology, anthropology and film theory is accompanied by a spoken word performance ‘The White Ink Lecture’ by Glasgow-based artist Ruth Barker with published editions available on Gibbs’s and Barker’s individual practices.

‘In trying to ‘articulate something that defies articulation and “verification”’ on subjects such as expressionist German film maker FW Murnau’s motion picture Tabu (1931) and the precognisance of his early death during its production she exposes the ‘privileges of rationality,’ capitalism and modern thinking to a ‘magical approach’. Her films explore consciousness shifted from singular to plural and to theories of embodied, authentic and feminine knowledge. These ‘expanded mental dimensions (multiplicity, of clairaudience, clairsentience, clairvoyance)’ find root in her interest in the American psychic Jane Roberts.’

Ripples on the Pond is an exhibition which has at its core works from the Glasgow Museums’ Collection. It takes as the starting point recent acquisitions from Glasgow Women’s Library’s 21 Revolutions series, relating them to other works in the collection and sparking questions about gender, themes and media choice in relation to women’s practice and visibility. The exhibition is a conversation between the works in the collection on paper and moving image with invitations to Modern Edinburgh Film School and LUX Scotland to programme artists’ screenings, within and beyond the gallery space.

View all posts by playablespaces

Browse through posts by programme area

There was an error retrieving images from Instagram. An attempt will be remade in a few minutes.